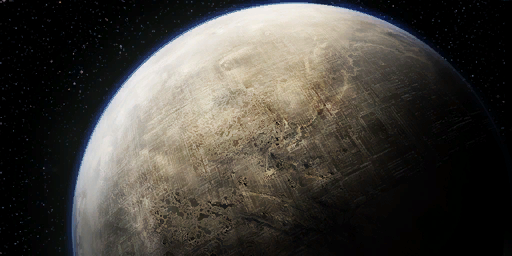 Rakhana is a dry and barren planet covered in rocky deserts. Eight centuries ago, the already-arid drell homeworld began its swift descent into lifelessness due to disastrous industrial expansion. The drell lacked interstellar flight capacity, and with their population bursting at 11 billion they faced certain doom. Fortunately, the hanar made first contact with the drell around 2000 CE, and over the following decade they evacuated thousands of drell to their own homeworld, Kahje. The remaining billions left on Rakhana gradually perished on their dying planet, warring against each other for diminishing resources. Today, Rakhana is a cemetery world, home to only a few thousand drell living in clusters never exceeding a few hundred; during pilgrimage season the population can double.